Muscle physiology: Physiology is the study of the function of living systems, the mechanical, physical, and biochemistry of function and energy transfer. Muscle physiology is concerned with the types of muscle tissues (of which there are three). Here I discuss skeletal muscle specifically. A better understanding of muscle histology, physiology, and function will help us understand how to stretch more effectively.

Skeletal muscle is made up of individual muscle fibers that are the building blocks of the muscular system.  Most skeletal muscle begins and ends with tendons and the muscle fibers are arranged in parallel between the tendinous ends so that force of contraction is additive. Each muscle fiber is a cylindrical, long multinucleated cell. There are no bridges between cells.
Muscle fibers are made up of fibrils and the fibrils are divisible into individual filaments. The filaments are made up of the contractile proteins.
Skeletal muscle contains the proteins myosin, actin, and tropomyosin.
The muscle fibrils are surrounded by structures made up of membranes that appear in electron photomicrographs as vesicles and tubules. These structures form the sarcotubular system.  The sarcoplasmic reticulum forms an irregular curtain around each of the fibrils between its contacts with the T system of transverse tubules that perforate the cell membrane of the muscle fibers.The function of the T system is to the rapid transmission of the action potential from the cell membrane to all the fibrils in the muscle. 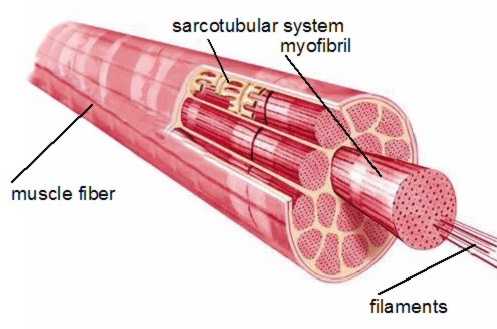 Shortening of the sarcomere is the result of the formation and subsequent detachment of bonds between myosin and actin causing the filaments to slide past one another. 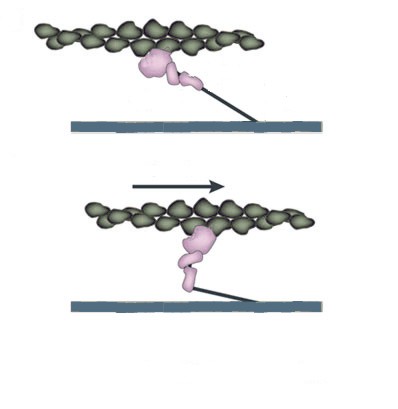 Muscle contraction requires energy. The muscle fibers effectively convert chemical energy into mechanical energy. This of course is not 100% efficient and so releases heat. The immediate source of this energy is the phosphate derivatives in muscle produced from the metabolism of carbohydrates and lipids.

Thermodynamically. the energy supplied to a muscle must equal its energy output. The energy output appears in work done by the muscle contraction, the formation of phosphate bonds, and heat. The overall mechanical efficiency of skeletal muscle is up to 50 percent.  Consequently, heat production is significant.

The heat given off when at rest, is the external manifestation of the basal metabolic processes. Following contraction, heat production in excess of resting heat continues for as long as thirty minutes. This recovery heat is the heat created by the metabolic processes that restore the muscle to its precontraction state. If a muscle that has contracted isotonically is restored to its previous length, extra heat  is produced (relaxation heat). External work must be done on the muscle to return it to its previous length and relaxation heat is mainly a manifestation of this work.

Energy and work continues to take place at the cellular level long after physical work of the muscle has taken place.

Fibre types vary based on isoenzyme activity of the myosin and the metabolism of the muscle.  Muscles containing many type 1 muscle fibers are called "red" muscles because they contain more myoglobin, and are darker than other muscles. These respond slowly and have a long latency, are adapted for long, slow posture maintaining contractions. A lot of the back supporting muscles  are red muscles. "White" muscles which contain mostly type IIB fibers achieve short twitch durations and are specialized for fine skilled movement. The muscles of the eyes and some hand muscles are fast muscles. 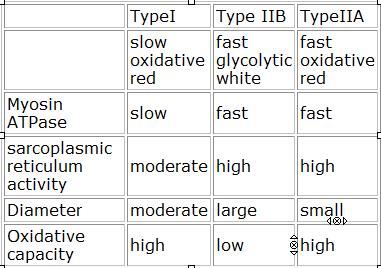 The  fast/slow twitch fibre composition not only varies amongst muscles, but also amongst individuals. This variability in muscle physiology has been correlated with athletic performance. In mixed fibre muscles a short distance runner may have 75 % fast twitch, and a long distance runner may have as much as 75% slow twitch in the same muscle. Selective training for a preferential fibre type is beneficial for task specific sports. 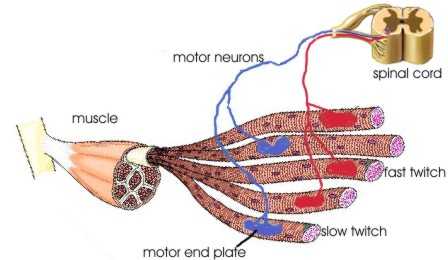 The Strength of Skeletal Muscle

Muscle physiology research has shown that mammalian skeletal muscle is capable of exerting 3-4 kg of tension per square centimeter of cross sectional area.

Sources of energy for muscle contraction

The high energy bond in the terminal phosphate  of ATP provides energy for muscle contraction. 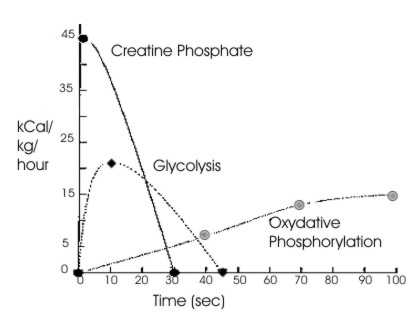 Human beings will forever be trying to outdo each other. Training  focuses on increasing speed, strength, and power in order to maximize athletic performance. Muscle physiology shows that the musculoskeletal system and neuromuscular system are complex and possess nonlinear intrinsic properties which vary depending on the environment, and the sport.

The mechanical output of a muscle depends on several intrinsic properties:
Force-length relationship
There is an optimal muscle length at which a maximum force can be generated. Force declines when the muscle is in a longer or shorter state.
Passive elasticity
Elasticity of the connective tissue component of the muscle (fascia, epimysium, perimysium, etc) also contributes to the overall force generated when a muscle is stretched beyond its optimal length.
Force-velocity relationship
There is a relationship between the force developed by a muscle and and the rate of change in a muscles length. As a muscle shortens more quickly the force that the muscle can generate declines exponentially. When a muscle is undergoing an eccentric contraction (lengthening and contracting)  the force generated increases as the speed of lengthening increases to a point.
Timing of muscle activation
There are delays between the time  the nervous system recruits a muscle fibre and the time the muscle fibre contracts. This is primarily due to the movement of calcium and cross bridge formation. Because muscles take time to "turn on"and "turn off"  there will always be a delay that can affect athletic performance.

Extrinsic properties that influence force are as follows:

This change will influence performance in terms of muscle power and muscle strength. According to muscle physiology studies muscle strength generally peaks  in both women and men in their 20's and this remains relatively unchanged until their 50's. At 60 muscle strength declines by approximately 15% or more each decade. Reduced muscle power is also probably due to changes in contraction velocity and neural activity.


Training has been shown to reduce the rate of loss of strength and power that comes with aging. Some athletes continue to compete into their 80's. With the loss of fast twitch fibres the older athletes tend to prefer endurance sports. In any marathon you will see a large number of older athletes in the 50-70 age range. This understanding of muscle physiology can help everyone train smarter.