Adductor stretches target the group of muscles on the inside of the thigh including the groin. These muscles work to pull the thigh inward, hold you on a horse and to stabilize the pelvis when weight bearing.  These muscles include the pectineus, gracilis, adductor longus, brevis, and magnus. Groin and adductor injuries are common in sports that require flexibility in hip outward (abduction) movements such as hockey players.

What are the Adductors.
Adductor Stretches
Groin Strains

What are the Adductors 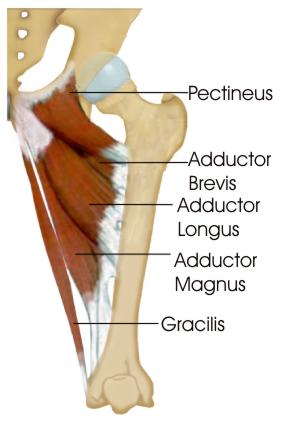 The adductor group of muscles makes up most of the mass on the inside of the thigh:
Pectineus
Origin:     This is a short flat muscle that sits over the front of the hip originating from the pubic bone.
Insertion:   The pectineus inserts into the pectineal line of the femur.
Action:     Adducts and flexes the thigh

Adductor Brevis
Origin:     This muscle is deep to pectineus and adductor longus and anterior to adductor magnus. It originates from the pubic bone.
Insertion:     The adductor brevis inserts into the pectineal line and the proximal part of the linea aspera on the femur.
Action:     Adducts the thigh and is also a very weak flexor.

Adductor Longus
Origin:     The adductor longus is the most anterior of the adductor muscles. It originates from the pubic bone.
Insertion: The adductor longus inserts into the middle third of the linea aspera on the femur.
Action:     It adducts and flexes the hip. it can also laterally rotate the flexed femur.

Origin:     The adductor magnus is the largest of the adductor group. It originates from the pubic bone and ischial tuberosities.
Insertion:     It inserts into the gluteal tuberosity, linea aspera, adductor tubercle, and the medial supracondylar line of the femur.
Action:     it adducts the hip and also extends the hip.

Gracilis
Origin:     The gracilis is a long strap muscle on the inside of the thigh. It originates from the pubic bone.
Insertion:     Gracilis inserts into the medial aspect of the tibia proximally.
Action:     It adducts the hip and flexes the knee. 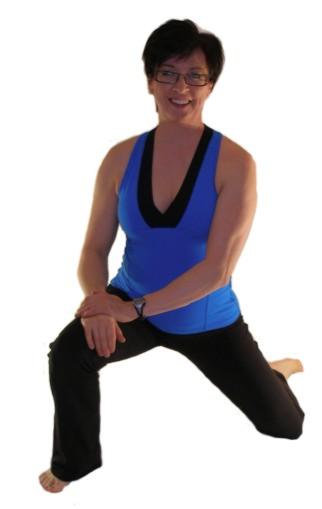 Short Adductors can also be stretched in sitting. 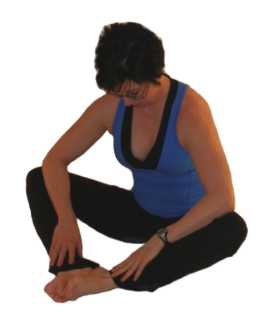 Long adductors can also be stretched in sitting.

Groin strains result from a sudden lengthening of the groin muscles beyond their normal length. This occurs frequently in sports that involve quick stops and starts, and cutting movements such as hockey, soccer, and football. Goalies are particularly susceptible.

Inadequate warm up, poor core stability, adductor muscle tightness, and poor technique can all predispose one to a groin strain. Lengthening the adductor muscles allows for greater excursion before stress is placed on the connective tissues of these muscles.

If one is in doubt, medical advice should be sought. Groin pain can be due to other causes as well, such as hip joint problems, nerve irritation, and herniae.